Covid-19 posed difficulties to many people in 2021, but not to securities investors. They earned big money as the VN Index climbed to new highs. 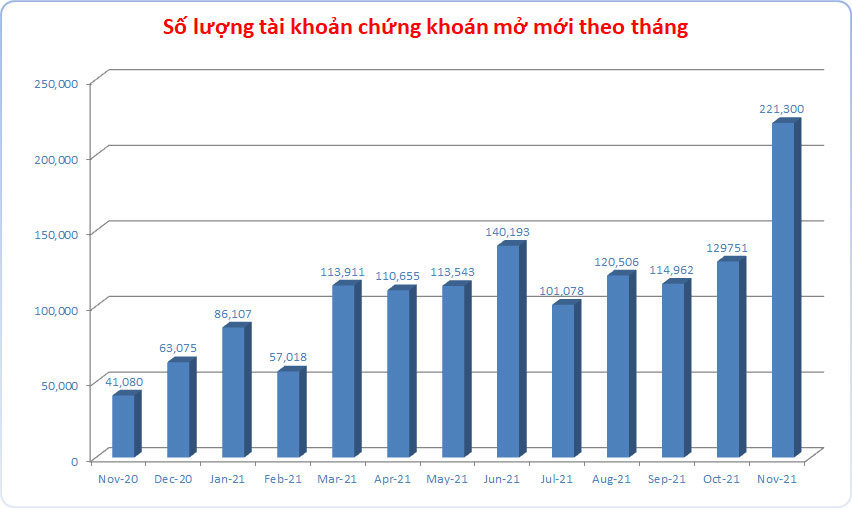 The number of newly securities accounts is increasing

Historic peaks
‘Booming’ was the word analysts use to describe the Vietnamese stock market in 2021, with sharp rises in the VN Index, liquidity and number of investors. The peak of 1,300 points, 1,400 and 1,500 occurred.
A new record was made in the last week of November when the VN Index for the first time hit the threshold of 1,500 points, despite bad news about the appearance of Omicron.
In 2020, the Vietnamese market was listed among the top 10 countries with the strongest resilience and recovery during the pandemic. In 2021, the market continues growing in line with the upward trend in the world.
However, it also saw sharp decreases in some trading sessions. The latest occurred on December 3, when the index dropped by 39 points to 1,443 points. Prior to that, declines were seen in mid-July and late August, from 40-50 to 73 points each session.
In Vietnam, the expectations on the stock market remain relatively high. PYN Elite believes that the bailout for economic recovery worth VND800 trillion for 2022-2024 may push the VN Index to 2,500 points by the end of 2024.
Strong liquidity
Just two years ago, the trading value of VND10 trillion per session was just a faraway dream. But the dream has become real and the trading value per session was even much higher.
On November 20, 2021, for example, VND56.3 trillion, or $2.4 billion worth of shares were traded. More and more trading sessions with trading value of $1-2 billion have been reported recently.
The figure of $1 billion (VND23 trillion) is a very high liquidity level if compared with the VND6.2 trillion in 2020 and VND18 trillion in H1 2021.
Securities companies’ reports show that people injected much more money into securities companies in 2021.
The liquidity has been increasing sharply as the stock market has become an attractive investment channel for people who have idle money. Also, the fixing of technical problems at HOSE was behind the high liquidity.
Prior to that, in April, investors complained that the stock market fell into a bad situation as their orders could not be implemented properly, while electronic boards showed wrong figures. As a result, they had to buy or sell blind.


In early July, the HCM City Stock Exchange (HOSE) began using a new trading system provided by FPT, the Vietnamese largest information technology group, which is capable of dealing with 3-5 million orders per day, or triple the old system.
New investors
For new investors, securities are considered a stable investment channel. The Vietnamese stock market’s size has grown and is no longer just a channel for small ‘surfing investors’.
As many as 1.3 million securities accounts were opened in the first 11 months of the year, which was equal to the total accounts opened in the last three years combined.
According to the Vietnam Securities Depository (VSD), the number of newly registered securities accounts was 221,314 in November 2021 alone.

Experts attributed the soaring number of new securities accounts to low bank deposit rates, the Government’s tightened control on corporate bonds and economic recovery in the new normal.
The goal of having 10 percent of population investing in securities is no longer a faraway dream.
Analysts say that with the current market entry rate, the target of having 5 percent of population investing in securities by 2025 set by the Government may be attainable soon. The total domestic securities accounts have reached 3.8 million.
In November alone, nearly 221,000 accounts were opened, the highest figure in the 21-year operation of the Vietnamese stock market.
The record high number of new investors and the amount of capital pumped into the market have balanced supply and demand as foreign investors sell more than buy. Individual investors had a net purchase of VND84 trillion in the first 11 months.
Businesses with high capitalization value
Four listed companies on HOSE have a capitalization value exceeding $10 billion, namely Vingroup, Vietcombank, Vinhomes and Hoa Phat.
In June, the HCM City bourse named 20 businesses with market capitalization value of over $1 billion. In late November, the figure was 45.
As of November 2021, HOSE had reported total capitalization value of VND5.7 quadrillion, or $245 billion, equal to 91.41 percent of 2020 GDP. The capitalization of the stock market has soared, reaching the $330 billion threshold.
In 2021, the capital mobilized through the share market was nearly VND80 trillion, which was four times higher than the year before.
Foreign investors
Foreign investors sold more than they bought in 2021 with a net sales of VND62 trillion. This was a record high which was four times higher than their net sales in the entire year of 2020.
Foreign investors’ net sales were seen at the beginning of 2020, when Covid-19 broke out. This was also the trend in Asian markets, with the net sale of tens of billions of dollars in South Korea, Taiwan and Thailand.
In Vietnam, a number of stocks with sharp price increases saw considerable net sales, including Hoa Phat, VP Bank, Vinamilk, Vingroup and VIetinBank.
Foreign investors sold more stocks than they bought though the Vietnamese market still has not been upgraded from frontier to emerging status.
The number of accounts owned by foreign investors had hit 38,000 as of September 2021.
Duy Anh
The stock market has set records in terms of scores, liquidity and the number of new accounts this year, as investors have seen it a shelter amid complex developments of the COVID-19 pandemic.
The growth of the stock market since mid-2020, especially in 2021, has boosted investors’ demand for margin lending.
Tags: