Red Velvet’s Irene and Seulgi are set to make their debut as the group’s first unit group, and they shared stories about how their unit was formed, what people can expect, support from fellow Red Velvet members, and more.
When asked how they’re feeling, Irene said, “I’m excited and nervous about how people will respond to us doing something new. We worked hard to prepare, so I hope we get a lot of love.” Seulgi added, “We do feel a bit of pressure as we’re the first unit group from Red Velvet, but Irene and I have great chemistry since we’ve been together for such a long time so I’m feeling confident.” 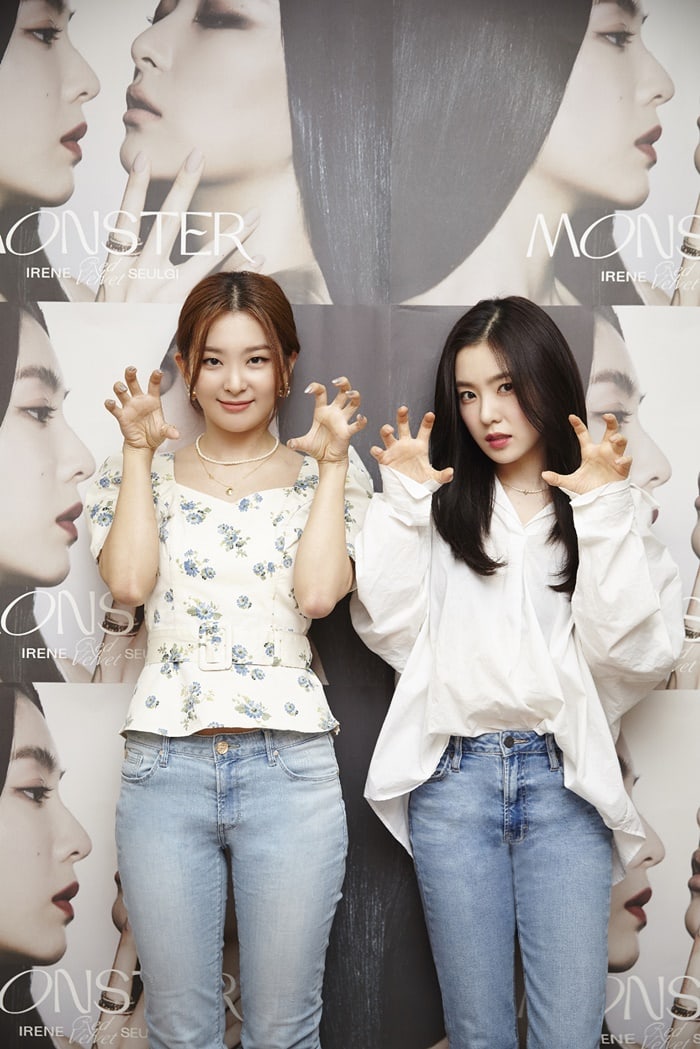 The duo went on to explain what kind of song their new title track “Monster” is and talking about the first time they heard the song, Irene said, “My first thought was that it was ‘different’ and ‘powerful.’ I think everyone will agree when they hear it.” Seulgi talked about the performance aspect of the song as she said, “The performances in the intro and outro are unique. With the dancers, we form a spider shape, and I think it goes really well with the title ‘Monster.’ The biggest charm of the performance is how we’re styled like twins, and our choreography looks like we’re controlling or mirroring each other at times, so I hope people will pay attention to our performances.”
Irene and Seulgi also discussed what sets them apart as a unit group and Irene said, “I think people will be able to see a cooler and more intense side of us than what we’ve shown till now.” Seulgi added, “For Red Velvet, we can be sweet or smooth, but I think we’ve gone for a more intense concept this time. I think our charm is our ability to put on a unique performance that showcases our chemistry.” 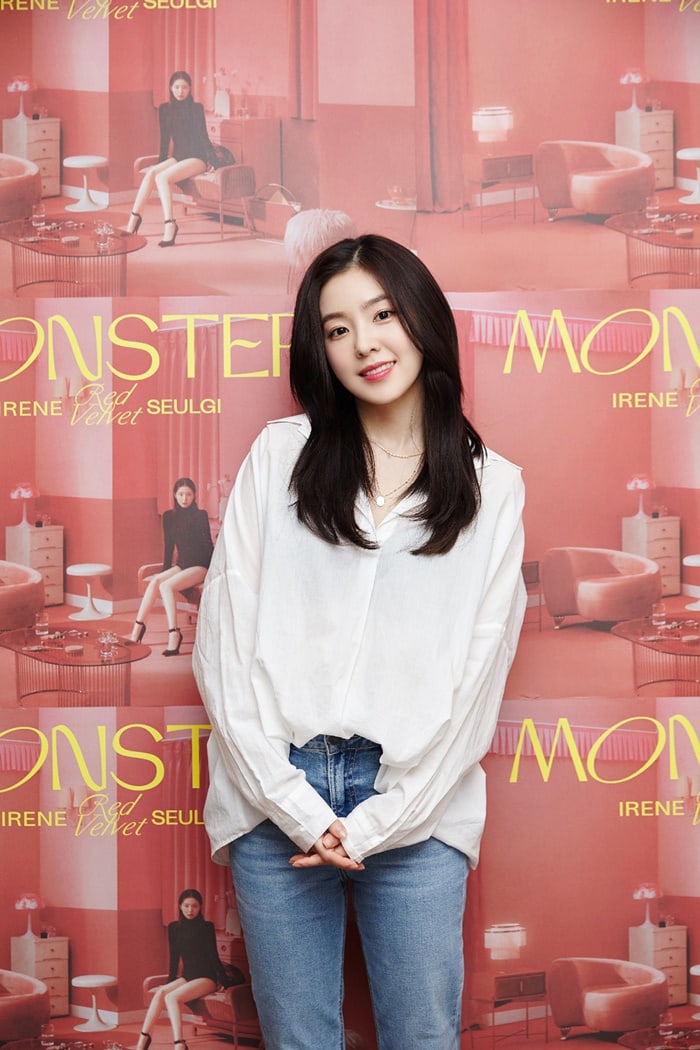 The duo revealed that during the preparation process, they had the chance to talk to each other even more than usual as they discussed aspects of the album. Seulgi said, “We really paid attention to everything from the songs to our image. We thought people might feel like our song felt empty because we were going from five people to two, so the two of us shared singing methods in the dorms and worked hard to have our voices combine well.” Irene added, “We really paid attention to every thing. Not only things like recording, choreography, and the music video, but also what we could do for all the fans who have been waiting for us.”
Irene and Seulgi expressed confidence in their partnership as Irene said, “We know each other so well that it’s easy to get in step with each other,” and “We’ve been working together quite a lot, since even before our debut, and I think our synergy is what led to this unit being created. Seulgi added, “Although we may be different, we are able to respect and understand each other, coming to agreements even when our opinions differ and making up for what the other lacks,” and “Out of all the Red Velvet members, the two of us have spent the most time together, and I think our chemistry will be able to show something new that is different from what we’ve shown as Red Velvet.” 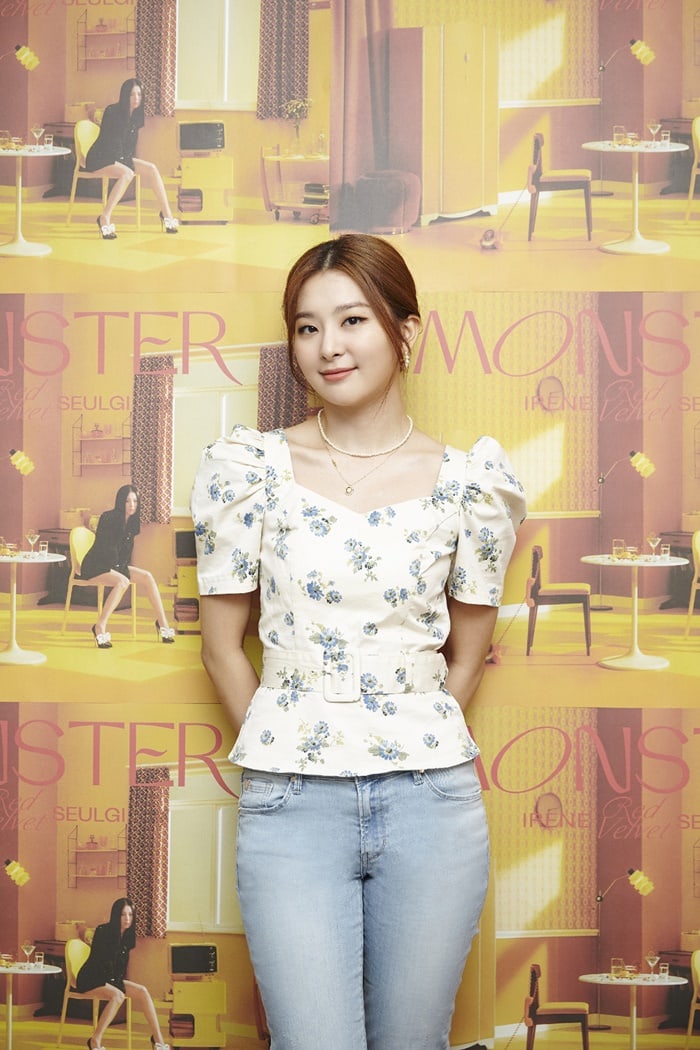 The pair talked about the amazing support they’ve been receiving from the other Red Velvet members as Irene said, “They’ve given us so much support and said we were so cool. They’d watch our performances and ask us to teach them so they could follow along with us, and their support has been such a source of strength for us.” Seulgi said, “When we were filming our music video, the others sent us snacks that we enjoyed so much. They said they’d come support us with delicious food once we begin promoting, so I’m excited.”
Finally, Irene and Seulgi discussed their goals and future plans. Irene said, “My goal for now is to be able to complete our promotions well. Both of us have learned so much through this process, so we want to do well, and we hope we will experience growth through these activities.” Seulgi said, “We plan to showcase a variety of content as we’re emphasizing the performance aspect, so I hope people will enjoy it and think, ‘I didn’t know Irene and Seulgi could do this!’”
Red Velvet – Irene & Seulgi will be releasing their first mini album “Monster” at 6 p.m. KST on July 6. Check out the teasers ahead of the release!
Source (1)