“Journey to the West: The Demons Strike Back,” one of the most anticipated films of the year, is aiming to become the Spring Festival box office champion and breaking new box office records.
Written and produced by Stephen Chow and directed by Tsui Hark, the film released a new trailer at its last press conference in Beijing yesterday, with an all-star cast appearing on stage to promote the film. 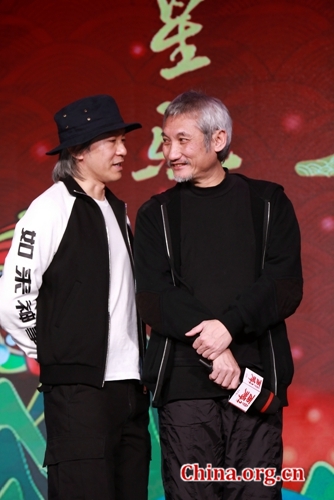 The new trailer shows the dark side of the Monkey King and his two fellow pig and fish demon-turned-apprentices. The trailer also shows imaginative fight and action scenes, which were kept in tight secrecy in previous promotional materials.
“Journey to the West: The Demons Strike Back,” another adaptation based on China’s ancient fantasy novel “Journey to the West,” is a sequel to 2013’s “Journey to the West: Conquering the Demons,” which was directed by Chow and stars Shu Qi, Huang Bo and Wen Zhang. The first installment grossed 1.244 billion yuan (US$203.5 million) on the Chinese mainland alone and was the highest grossing Chinese film of the year.
“The Demons Strike Back” has performed strongly in presale, raking in more than 20 million yuan already, though there are still 11 more days until its official release on Jan. 28. Hark and Chow will also promote the film in several other Chinese cities.
The Spring Festival film season has become China’s most profitable film season. Last year, blockbusters released during the Spring Festival – from Feb. 8 to 14 – raked in 3.4 billion yuan (US$489 million) in a week, making February China’s most glorious moment in film history, as China overtook North America to become the world’s largest movie market that month. Chow’s own “The Mermaid” was the biggest winner; it went on to gross 3.39 billion yuan (US$517.3 million) in its total run to become the highest grossing Chinese film ever.
The success of “The Mermaid” prompted industry analysts to speculate and predict a 2016 year box-office total of 60 billion yuan (US$8.64 billion), but box-office receipts suffered sharp slowdown in the months that followed. Although “The Demons Strike Back” may be the movie that revives the Chinese film market in the upcoming holiday season, box office analysts anticipate that it won’t surpass the achievement of “The Mermaid.”
The films to vie for the box office crown with “The Demons Strike Back” include comedian Wang Baoqiang’s directorial debut “Buddies in India,” a modern and twisted tale also based on “Journey to the West,” Jackie Chan’s “Kung Fu Yoga,” Chen Yu-Hsun’s “The Village of No Return,” animated movie “Bonnie Bears: Entangled Worlds” and author-turned-director Han Han’s second directorial venture, “Duckweed.”
Behind “The Demons Strike Back” it was a huge financial investment. The number of producers and investors of the film is 21 in total, including state film company China Film Co., Stephen Chow’s own Star Overseas, Hehe Pictures, as well as film giants Wanda Pictures, Huayi Brother Media, and Taopiaopiao Film Culture Company backed by e-commerce giant Alibaba Group. The film reportedly cost 400 million yuan (US$57.98 million) to make.
But the most interesting part is the deal of Shanghai New Culture Group and Premium Data Associates Limited, which are also on the producer list. Shanghai New Culture Group and Young & Young International (both owned or controlled by the same owner) just acquired 51 percent of ownership of Premium Data Associates Limited, another company owned by Chow, for a staggering 1.32 billion yuan (US$191 million) in order to have more control over Chow and his film projects, including “The Demons Strike Back.”