BIGBANG’s Seungri brought the laughs once again on JTBC’s “Idol Room”!
On the December 25 episode, the variety show aired a Christmas “Thank You Awards” special featuring Seungri, Wanna One, and (G)I-DLE.
Jung Hyung Don and Defconn visited YG Entertainment headquarters, where Seungri was the first person to receive an award.
Defconn said, “Seungri is a major contributor to first place in viewership ratings.” Jung Hyung Don added, “He appeared without a group, but this happened because Seungri himself will soon be a brand. He’s surpassed G-Dragon. He’s the man of viewership ratings.”
Seungri said, “I light-heartedly appeared on ‘Idol Room.’ I’m sorry to my colleagues, but it’s not good to appear on shows as a big group. It’s good to have an impact when appearing.”
He continued, “After my appearance on ‘Idol Room,’ my DJ friends are doing well. They’re doing well at clubs. I saw that [WINNER’s] Song Mino recently appeared on the show. He got a lip piercing. Can he talk with a lip piercing?” When BLACKPINK was brought up, Seungri said, “I don’t think BLACKPINK has any problems. Why did I get No. 1 in viewership ratings? BLACKPINK should’ve gotten No. 1.”
Defconn then asked, “I’ll ask while I’m here. Why did you unfollow ‘Idol Room’ on social media? You unfollowed after filming.” Surprised, Seungri said that he had never unfollowed the show. After checking and seeing that he had unfollowed the account, he followed it again.
It was then revealed that viewership ratings hit a peak when Seungri chose Taeyang as his choice of idol. Jung Hyung Don asked about Taeyang, who’s currently serving in the military, and Seungri explained, “I recently sent him a text message, and he said the place where he is currently stationed is colder than Russia. He’s never been to Russia, but said that it’s colder than Russia.”
Seungri continued, “I saw G-Dragon at the salon when he came out during his break. He said his hair grew so he had to cut it short again. There’s something I feel sorry to G-Dragon about. He waited to see me for an hour. Before, he would’ve said, ‘Why do I need to see you?’ but this time he waited for an hour to see me. I think he might’ve realized in the military who the most successful person is. The first thing I heard when I saw him was, ‘Seungri. I’m a soldier and you’re a celebrity, but I think I’m cooler.’” 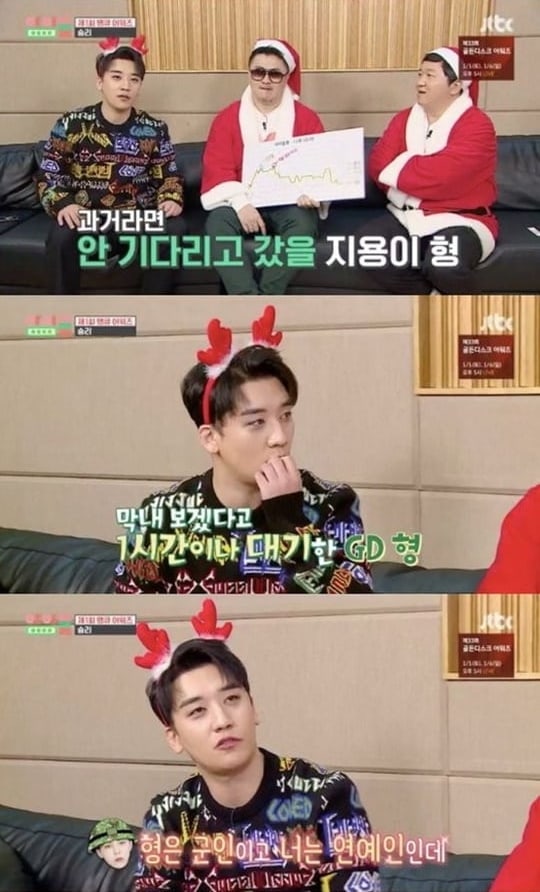 In a video message to Taeyang, Seungri said, “Thanks to Taeyang, I was able to maintain the No. 1 viewership ratings spot on ‘Idol Room’ this year. Although top idols came out, I got No. 1 in the name of BIGBANG. Although it’s really cold, please do well in the military, and I’ll see you soon. Good luck with your military service.”
Seungri then said that iKON’s B.I always answers him while sleeping whenever Seungri calls him. He then called B.I, who indeed answered while sleeping. Seungri said, “It’s me,” and B.I replied, “I’m sorry, but who?” He explained, “The person who’s close with Jung Hyung Don,” but B.I replied, “That’s a difficult clue.”
When Seungri asked if he appeared as an unfamiliar number on his phone, B.I answered, “That’s correct. He contacts me via text message or messenger.” Defconn added, “Seungri said he has a complaint. He said he doesn’t know why you’re always sleeping when he calls.”
B.I made everyone laugh when he responded, “It may have all been for this moment.” Seungri then said, “Although you didn’t save my number, you gave me laughter. You should sleep now.” B.I replied, “I think I definitely know your number now,” and Seungri said, “This is the number I’ve been using for three years. Why do you know it now?”
The BIGBANG member then tried to call Song Mino, but he didn’t answer. Seungri then said, “B.I sent me a photo and he saved my number as ‘Let’s really not forget Seungri. Love. Happiness,’” and showed his phone to the camera as proof. 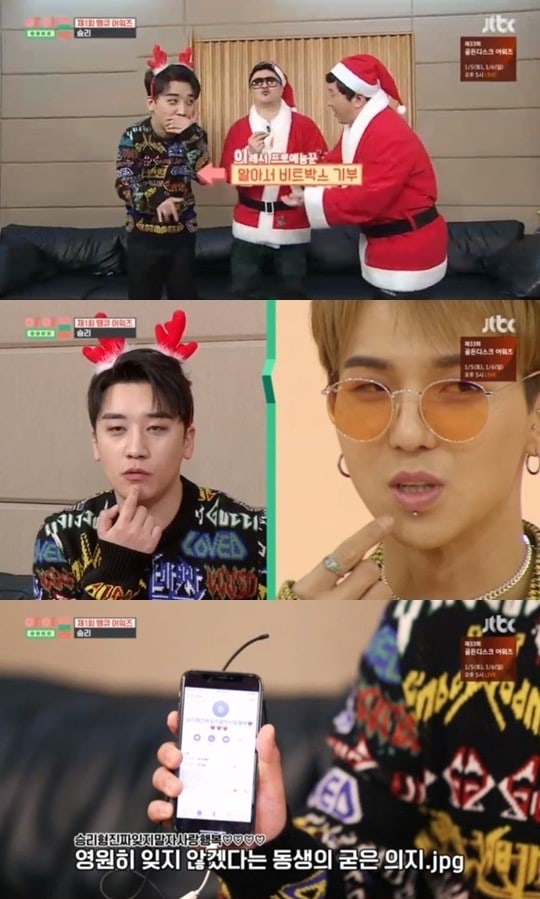